Karma Online : Prisoners of The Dead says 'get to da choppa' with new Trailer 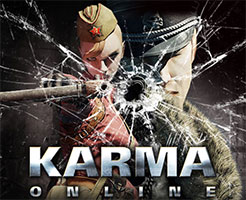 Joymax, a leading online game developer and publisher, announced that it will start the year 2012 with a major update for its first-person shooter World War II game, Karma Online: Prisoners of the Dead. Starting today, players can take part in a new A.I. Helicopter mode whereby a team of four players work together to take down a heavy-duty V5 Helicopter gunship. To learn more about the game, players can visit its official website.

“The universe of KARMA is expanding rapidly and we are pleased to introduce the new A.I. helicopter gameplay mode into the mix,” said Joymax CEO, Nam-chul Kim, “The new mode is perfect for group play and with the introduction of the comeback soldiers’ events, clan championship and a new region specific channel for players in Turkey, 2012 is already shaping up to be a massive year for KARMA”.

In the new A.I. Helicopter mode, players are grouped into four-man units that must work across ten grueling rounds of frantic multiplayer mayhem. Each unit faces a pre-determined number of enemies that must be defeated in order to advance forward. In select rounds, players will also face off against a variety of bosses including the heavy-duty V5 Helicopter gunship.

Joymax will be running a Comeback Soldiers Event for all veteran players of KARMA from January 31st. All returning veteran players during the event period will be awarded with special in-game items.

Joymax has also opened an exclusive channel to better cater to its expanding Turkish community. The new server aims to provide a better gaming environment for players both inside and outside of Turkey. Similar channels will be rolled out to local communities throughout 2012.