Joymax announced today that in its first-person shooter World War II game, Karma Online: Prisoners of the Dead, players have the chance to win a slew of cash shop prizes – OMG! This is in addition to events which are already taking place fr-om now until September 20th. To learn more about the game, players can visit its Homepage.

The “OMG Event” is the ultimate giveaway for KARMA players, and it couldn’t be easier for players to win! All the soldiers who log in between now and September 14th Joymax Standard Time (JST) will receive a free cash shop item, randomly selected fr-om a pool of prizes. This will be a great chance to experience some of the most prestigious and valuable items fr-om the item shop before the official cash shop launch. So tuck away that extra silk for future use and come play and win now.

The list of awards includes such spiffy gifts as:

This is in addition to the current events, which continue for another two weeks and include Axis vs. Allies (players in clans and their leaders receive silk for top rate performances), Clan Matches (Top 3 clans as of the 14th receive Clan Marks and prize packages), and a twice-daily Happy Hour where players receive increased KP and EXP.

Developed in conjunction with Dragonfly, and published by Joymax, KARMA Online: Prisoners of the Dead is the newest installment in the KARMA Online series, the top online first-person shooter series in Korea. Players go back in time to World War II, where they must choose to side with the Axis or Allied powers and join the fight for global victory – with a zombie twist. In this virtual and historical simulation, players will be up against enemy troops as well as hundreds of the walking dead fr-om the remains of the catastrophic battle. KARMA Online: Prisoners of the Dead will be available in English, German, Spanish and Turkish. 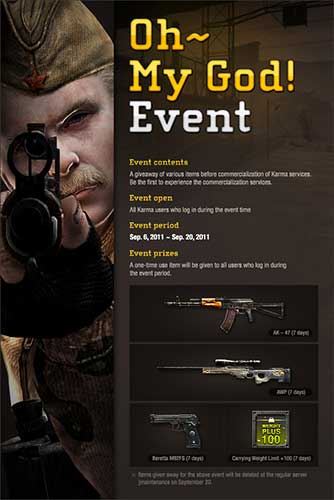