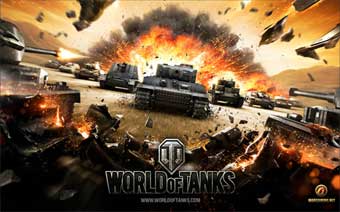 Wargaming.net is glad to announce the release a new explosive gameplay trailer for its one-and-only Panzer MMO game World of Tanks and invites everyone to join the closed beta test.

The trailer showcases the whole new class of combat vehicles available in the game – tank destroyers - pointing out both their strengths and weaknesses. The video touches upon tactics and strategies the! players driving these monstrous tank-crackers can use to contribute to their side’s win.

Tank destroyers play a crucial part in World of Tanks team-based gameplay. Efficient usage of their enormous firepower and long shooting range supported by smart positioning on the battlefield is the factor that decides the final outcome of almost every fight.

“Operating a Ferdinand or SU-152 is like safari hunting, “says Nick Katselapov, producer of World of Tanks.”Everything is under control as long as your targets stay at long range and nothing will stop you from picking off a tiger or panther. But as soon as the “kitties”approach your positions there’s hardly a way to survive.”

Join the beta at here!

For more information on World of Tanks, visit its website.

About Wargaming.net®
Wargaming.net® is an award-winning strategy game specialist, incorporated in the UK. Its 140-strong development team is located in Minsk, Belarus. Since 1998, the company has shipped 13 titles, including acclaimed Massive Assault series, Order of War RTS published by Square Enix, and three add-ons for Blitzkrieg II. Wargaming.net's Operation Bagration RTS was awarded the Best Strategy! Game of 2008 at Russian Game Developers Conference (KRI). At KRI 2009 and 2010 Wargaming.net® was named The Best Developer Company from ex-USSR. At KRI 2010 World of Tanks won “Best MMO” prize. Official web site: www.wargaming.net