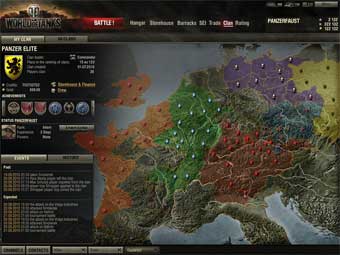 Wargaming.net reports the company is currently working on the Clan Wars mode for its Panzer MMO that will feature perpetual confrontation of clans in the persistent world of the game.

Clan Wars system is built around the Global Map of the Earth 1940’s divided into hundreds of provinces to fight for with player’s tasks being to rally friends, form a clan (from 15 to 100 members) and start conquering the world. Control over a province will let a clan acquire both monetary revenues and in-game benefits through unlocking special models of tanks and types of ammunition. In case of need a clan may resort to the help of Mercenaries acting as freelance warriors.

“We are not going to reinvent the wheel with the Clan Wars,” - says Nick Katselapov, producer of World of Tanks, - “we are trying to introduce a deep strategic layer into the game by adding a blend of our own innovative ideas and features from such timeless videogame classics as Civilization or Total War series with comprehensive trade relations and economy, well-thought-out diplomatic system and immersive inter-clan warfare. However, unlike traditional strategy games, in World of Tanks the way of your clan to global superiority will be paved with myriads of online battles against hundreds of other teams and thousands of real people, not just AI controlled bots. This will definitely inject extra thrill and fun into the game making every combat for a province a last-ditch fight.”

Alongside with the Clan Wars mode Wargaming.net plans to add Historic Campaigns and Missions, Clan Tournaments and a wide array of other clan activities.

The release of the game is scheduled for Fall 2010.

For more information on World of Tanks, visit its Website

About Wargaming.net
Wargaming.net is a UK-based strategy game specialist. Its 140-strong development team is located in Belarus. Starting from 1998, the company has shipped 13 titles, including acclaimed Massive Assault series, Order of War RTS published by Square Enix and three add-ons for Blitzkrieg II. Wargaming.net's Operation Bagration RTS was awarded the Best Strategy Game of 2008 at Russian Game Developers Conference (KRI). At KRI 2009 and 2010 Wargaming.net was named The Best Developer Company from ex-USSR. Currently the company is finalizing World of Tanks MMO action game and is working on unannounced MMO strategy project. Visit www.wargaming.net for more information.