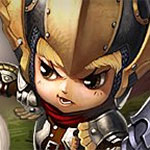 Knight Age, a unique riding-action 3D fantasy adventure, began its closed beta testing globally on July 10th and lasted a short week. "We were met with unprecedented interest in Knight Age: in the hours before the beta launched, excited players nearly crashed our servers trying to download the client!" said Nam-Chul Kim, CEO of Joymax.

Despite a slightly shaky start due to overwhelming demand, Knight Age’s closed beta test was overall a grand success. With special events running daily and bonus packages awaiting each player who logged in, the pace was fast and packed full of things to do throughout the week! Players were especially surprised to see the original combat system through mounts and battle-companions.

"The huge amount of players from closed beta means we’ve received an unbelievable amount of feedback, and we’ll be using it to move forward with open beta revisions." said Nam-Chul Kim, CEO of Joymax. "We're happy to see such global and positive responses to Knight Age. With massive PVP contents and dungeons to be added, we are eager to show the rest in the near future."

This is all in addition to Knight Age Online’s numerous game features; including the colossal PVP system pitting 50 allied knights against 50 opposing knights, Guild Siege Battles where the land’s castles can be claimed for glory and reward, as well as an intricate Pupa pet system where raising a powerful companion takes nurturing and dedication.

Players looking for all the latest news, including the highly anticipated announcement of the open beta dates, can check out Knight Age Online's Facebook or Twitter at @OfficialKnightAge.