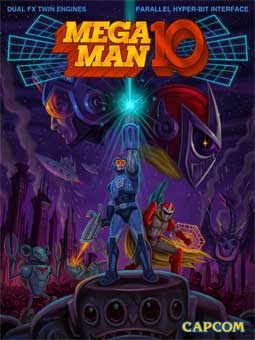 Mega Man 10 is released today on Xbox LIVE. This is the latest addition to the Mega Man series and can be downloaded across Europe for 800 MSP.

In addition to the game there is some exciting Mega Man 10 downloadable content coming to Wii-Ware, Xbox LIVE and PSN next week. Players will be able to download the new playable character, Bass and the first of the Special Stages which features Enker, a creation of Dr Wily’s who has completely devoted himself to Mega Man’s destruction.

Special stage 2 and 3 which feature Mega Man villains Punk and Ballade will be available for download at the end of April.

The original 2D classic Mega Man returns in Mega Man 10 for Nintendo WiiWareTM, Xbox LIVE and PlayStation Store This latest Mega Man title continues to take the series back to its old school roots with retro action platforming gameplay and classic 8-bit NES-style graphics and sound. Relive the Mega Man experience with classically inspired bosses, each with their own unique weapons and vulnerabilities.

Set within the Mega Man universe, it comes as no surprise that robotic antics are at play once again. The year is 20XX and a suspicious outbreak of Roboenza, a Robot Flu, has broken out infecting robots across the world. One month after the outbreak and the situation has become worse with robots out of control having destroyed the city and now holding it to ransom. Who is behind this mess? It's up to Mega Man to take on this sinister threat and get to the bottom of this viral mystery.