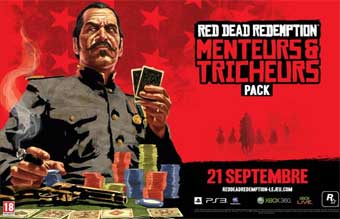 we are pleased to announce some new details about the Red Dead Redemption DLC series.

On the heels of the June Co-operative Multiplayer release, the Outlaws to the End Co-Op Mission Pack – which introduced six new Co-operative missions for up to 4 people to conquer together…

And the recent release, the Legends and Killers Pack – which mostly focused on Competitive Multiplayer and added 9 new map locations tailored for Competitive mode action, along with 8 playable characters from the world of Red Dead Revolver and the deadly Tomahawk everyone’s been hacking each other with online…

We are excited to bring you our next packs, starting with the September 21st 2010 release of our Free Roam release: the Liars and Cheats Pack, which focuses on expanding the Free Roam multiplayer experience as well as adding new modes to Competitive Multiplayer.

This pack will be released on September 21st worldwide for download on both PlayStation Network (€9.99) and Xbox LIVE (800 Microsoft Points). Stay tuned for lots more detail on the content in this pack including first screens and more.

Then, later this fall, we will be presenting our original mostly Single-Player DLC release: the Undead Nightmare Pack.

Unleashed upon the world of Red Dead Redemption, the Undead Nightmare Pack will feature an entirely new single-player campaign that follows John Marston as he tries to find a cure for the highly infectious zombie plague that has spread across the frontier.

All this, plus some new multiplayer modes and much more to be revealed in the weeks ahead. The Undead Nightmare Pack will be available simultaneously for download via PlayStation Network (€9.99) and Xbox LIVE (800 Microsoft Points). We'll have lots more info soon.

Additionally, we are going to be bringing you some free downloadable goodies in the next few weeks including the anticipated Hunting and Trading Outfits Pack which will give everyone the Savvy Merchant and Expert Hunter Outfits and related Challenges, plus special compatibility to enable everyone online to see the Red Dead Revolver multiplayer character skins being used by those who have purchased any of the DLC – we will have full details on this very soon.

For all the latest on Red Dead DLC, stay tuned here at the Rockstar Newswire, the official Red Dead Redemption website, and our Facebook and Twitter pages.