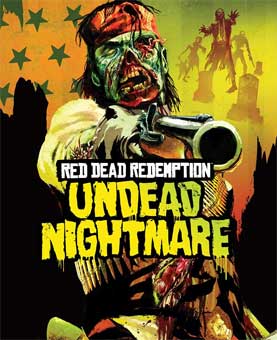 “With Undead Nightmare, Red Dead Redemption is completely transformed into an open-world zombie-horror experience,” said Sam Houser, Founder of Rockstar Games. “The single-player story brings back some familiar characters in new ways, while multiplayer is a thrilling, non-stop fight for survival.”

In addition, available in stores on November 23, 2010 in North America and November 26, 2010 in Europe, will be Red Dead Redemption Undead Nightmare, a standalone playable disc that bundles together for the first time ever, the Undead Nightmare Pack, the Outlaws to the End Co-Op Mission Pack, the Legends and Killers Pack, the Liars and Cheats Pack and all the Multiplayer Free Roam modes released to date. Undead Nightmare will be available at retail stores for $29.99/£24.99/€29.99 for the Xbox 360 system and PlayStation 3 system. The game is rated M for Mature by the ESRB and does not require a copy of Red Dead Redemption to play.

Set in the early years of the 20th century, Red Dead Redemption is an epic Western journey across the vanishing American frontier through the eyes of former outlaw John Marston. Alongside the rich, immersive single-player experience, Red Dead Redemption’s multiplayer offers a world of dynamic challenges, and competitive games suited for a player of any skill level.