UTV True Games, an international publisher of multi-player online games, today revealed the first screenshots for its first internally developed project, Faxion Online. The upcoming highly competitive, fully featured MMORPG allows players to become part of the classic struggle between good and evil; but with a twist. To learn more about the game and register for upcoming details and special offers, visit its website.

As the names imply, Crusaders and Reavers are strong all around. They can fill the classic roles of tanking or damage dealing with ease. They will also feature multiple skill paths players may choose to learn that best support their play style.

Reavers and Crusaders are powerful warriors who serve as the front lines in a fight, the close-range combatants who protect and defend their companions. Of all the classes, these rely most heavily on their gear and enjoy access to a broad range of weapons and armor. They know the quality of their equipment profoundly affects their ability to inflict and withstand damage. Only the mightiest of fighters with their great strength can survive the rigors of wearing such heavy armor and wielding such massive weapons.

Ascedia Peaks is a region of Purgatory where open world PvP may take place. Its appearance reflects the arrogance and pride of man. At their most noble, the folk who dwell here exude extreme self-confidence, a true appreciation for a job well done, and a profound belief in their own abilities. At their most base, however, their pride descends into disdainful haughtiness, vain boasting, and ultimately megalomania.

Purgatory Valley is another region where open world PvP may take place. A lush tropical valley sits nestled among rocky cliffs where ancient, vine-strangled ruins stand as crumbling icons to numerous once-great civilizations. The seven-pointed, star-shaped city of Purgatory dominates the center of the valley, its towering walls looming over the gloomy floor of the jungle. The River Styx bisects both the valley and the city itself, where waterfalls plummet from the massive walls and spill into the river below.

Faxion Online will feature a full, persistent world with competitive and robust PvP play and territory control. A group of industry veterans with significant experience on titles such as Shadowbane, Ultima Online and many others are developing the title. Territory control, an important and deep feature of the game, will sport two main factions -- the forces of heaven and hell – where players will engage in grand battles to vie for control of a territory and influence on behalf of their side of the conflict. Players can expect to see a ground-breaking, competitive action game that strips away the typical experience and leveling grind observed in many MMORPG's today. 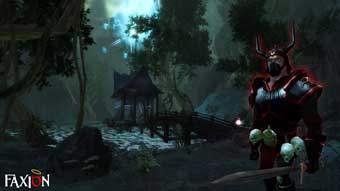 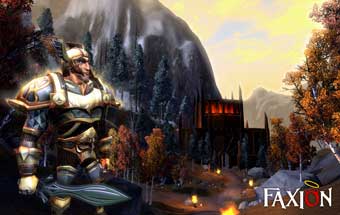