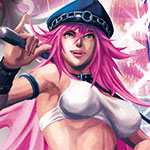 Street Fighter X Tekken Vita will deliver all the content from the home console version plus exclusive new features when it launches across Europe on October 19, 2012. These PS Vita exclusive features include:

The game will also allow Cross-Platform Play with PS Vita players being able to compete against PS3 players as well as the ability to challenge other owners wherever they are in the world either locally via Ad-Hoc or online via Wi-Fi or through the PS Vita’s 3G connection.