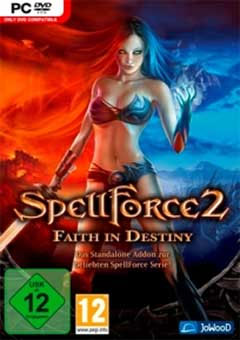 SpellForce 2 - Faith in Destiny has not been canceled, but further improvements & polishing are necessary. JoWooD Entertainment argues the rumors: "The official AddOn of SpellForce 2 - Faith in Destiny will be completed in due time", explains Reinhard Pollice, Producer JoWooD Entertainment. "Our highest priority is the quality of the game. The development is already in an advanced stage, but the game experience will be further enhanced in some sectors - like multiplayer stability. Due to this improvements the release of the game cannot yet be determined, we'll go with 'when it's done'."

In a time of chaos you assume a young man's role, charged with saving all of Eo from a new nameless evil. Along with a party of mismatched heroes and your dragon companion you must fight to unravel the mystery of this strange new enemy and discover your true destiny. Take heart as you tie together to strands of the previous SpellForce adventures in this all new, epic adventure.