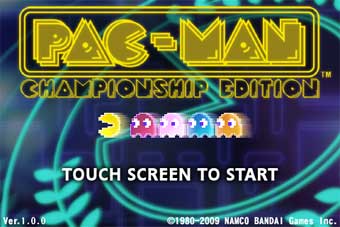 The massively enhanced sequel to the critically acclaimed Xbox Live Arcade title PAC-MAN Championship Edition, which has been played by 1.5 million people worldwide since launch, will invite PlayStation 3 and Xbox 360 owners to guide the little yellow fellow around a vast series of vexing mazes on the run from the day-glow ghosts.

NAMCO BANDAI Games have responded to player feedback for the new PAC-MAN Championship Edition DX and gone for broke with the game content, gameplay, music and visuals. Not content with the six courses in the first version, the new game features more than a 100 mind-boggling varied and challenging mazes to navigate. Building on the Time Score Attack mode featured in the original, this time players can also choose from a new Time Attack mode, a Mission mode with a series of objectives to fulfil, and Ghost mode in which players are rewarded for the number of ghosts gobbled.

For more information on NAMCO BANDAI Games' line up, please visit its website

About NAMCO BANDAI Games Europe
NAMCO BANDAI Games Europe S.A.S. is a leading software publisher producing a broad catalogue of high quality interactive entertainment for console and PC gaming platforms and online which is marketed and sold in 50 countries across Europe, the Middle East, Africa and Australasia. The company is a part of the NAMCO BANDAI group of companies known for creating and publishing many of the industry's top video game franchises including Tekken™, Dragon Ball®, Naruto™, SOULCALIBUR™, One Piece™, RidgeRacer™, Ace Combat™ and Tamagotchi™.