UTV True Games, an international publisher and developer of multi-player online games, and renowned developer Smart Bomb Interactive announced that they have partnered to bring a new online flight combat game, Sky Legends, built on the Unity engine. Smart Bomb, known for the development of such popular games as Snoopy Flying Ace and National Geographic Animal Jam, are developing the upcoming free-to-play flight combat game that will have players taking flight in customizable airplanes built for fast-paced multiplayer battles in an attempt to rule the skies. Scheduled to launch in the first half of 2011, players can learn more about the game and register to receive news updates at SkyLegends.com.

Players will take flight in this unique browser-based game where they will fly customizable open cockpit era airplanes and battle other players in fast-paced multiplayer combat. Influenced by FPS titles and based in a fictional fantasy world, Sky Legends will feature multiple factions to join or battle against as a work-for-hire mercenary that seeks to restore order to the world! The game’s item shop will include hundreds of items to enhance the player’s planes, weapons, and piloting skills, presented in numerous categories with exclusive items on offer. Airplanes in Sky Legends reflect the personalities and combat styles of their pilots; and with the diverse, fun art styles of three airplane classes to choose from and hundreds of possible enhancements, players will discover endless customization options.

“Sky Legends expands the typical flight combat genre of games and brings a fun and irreverent feel to the gameplay experience,” said Peter Cesario, Director of Product Development of UTV True Games. “Smart Bomb has an excellent pedigree of high-quality, fun and dynamic flying titles so we are confident that Sky Legends will be another amazing product from this team.”

At launch, players will be able to master the skies by battling in three fast-paced game modes including Dog Fight, Team Dog Fight, and Capture the Flag. Additional launch highlights will include community features such as friend’s lists, guilds, achievements, rankings and leaderboards. A diverse cast of characters, multiple weapons to earn and unlock, extensive customization features and diverse mission environments will appeal to both shooter fans and players who wish to reconnect with the aerial combat genre or try it out for the first time.

“Our team has an extensive background with successful flying games, and we are confident that Sky Legends will be an instant multiplayer hit,” said Graham Kays, Game Director of Sky Legends at Smart Bomb. “Our goal is to deliver the pulse-pounding action and intense competitive gameplay of aerial dogfighting without the complexity and inaccessibility of conventional aerial combat games.”

For more information and to join the community, visit the officiel website. 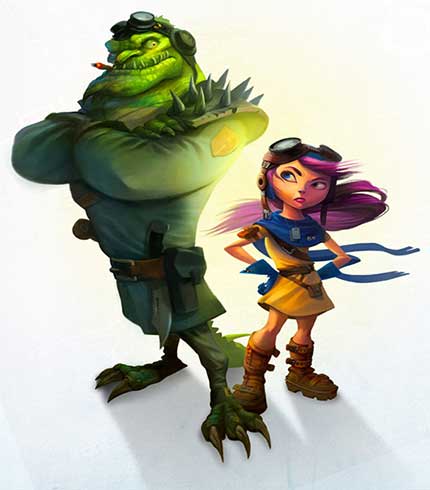 About Smart Bomb Interactive
Smart Bomb Interactive is a Salt Lake City-based development studio whose mission is to combine talent, tools and fun. Our team of game industry veterans features some of the best artistic, engineering, community and design talent currently working in interactive entertainment. We develop fun with substance for gamers of all ages. In 2010, our virtual worlds group launched National Geographic Animal Jam (www.animaljam.com), the premier online playground for kids who love games, animals, and adventure. Also in 2010, we redefined online flight combat with Snoopy Flying Ace, which rocketed to the top of the Xbox Live Arcade charts in June. Learn more at www.smartbombinteractive.com.