Dance! It's your Stage

Fabulous Moves: Dance! It's your Stage

In “Dance! It’s your Stage” players can get to dance at the best venues in the world. They start out on smaller platforms and work their way up to perform on all eight stages in the game. Players will enjoy 20 terrific dance routines, and can use the dance mat to appear on stage with friends in Party or Competition mode. Who will prove to have the most talent to become a dance star?

Besides Career mode with its own success story, players can cut to the chase and attempt Quickstart mode and plunge headlong into the game. The hopefuls can also learn new dance steps in the training room with Detlef D! Soost, who was involved right at the start of the game development and has personally contributed three dance routines!

20 songs have been produced exclusively for the “Dance! It’s your Stage” soundtrack, and players can attempt dance routines ranging from rock to pop with an increasing difficulty level. Publisher dtp young worked closely with the record label “DNAmusic” to produce the tracks.

The dance and rhythm game “Dance! It’s your Stage” will be available for 10 € on Xbox LIVE Arcade for Xbox 360 and was developed by Sproing Interactive Media, Vienna, Austria.

Image de Dance! It's your Stage 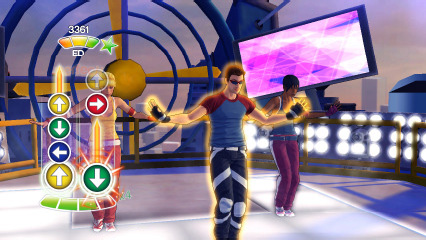 Titre : Dance! It's your Stage

About dtp young entertainment
dtp young entertainment GmbH & Co. KG was founded in December 2004. The Hamburg-based business conceives, publishes and licences themes for children, young people and families in the PC game and console product and merchandising segments. The key series labels, under which titles are published nationally and internationally, are “Horse & Foal“, “ANIKIDS“, “Classics to Go“, “J4G – JUST FOR GIRLS“ and “GripsKids“. In addition the Hamburg publisher’s portfolio includes a strong partnership series with the Ravensburger Spieleverlag game publishing house and stand-alone titles such as, for example, “America's Next Top Model™“.

About DNAmusic
Founded in 2009, DNAmusic is the creative collaboration of accomplished artists Florian Danklmaier and Markus Adamer, with their core expertise consisting of songwriting, composition and music production. Their long-standing experience and their creative spirits created an extensive resumé of songs, lyrics and jingles in both German and English language. The stylistic spectrum of successfully released compositions expands from Dance/Pop/Rock to Schlager to acoustic CI for enterprises.
Further information, sound files and a list of references can be accessed at www.dnamusic.at

Dance! It's your Stage : dernières infos