Sniper Elite, the Wii's most authentic and realistic sniper simulator from Reef Entertainment and Raylight, has premiered on YouTube 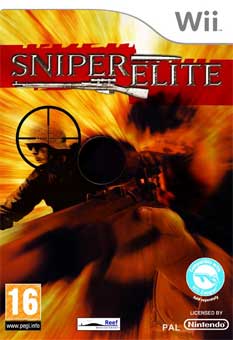 The original Sniper Elite was launched in 2005 on PS2, Xbox and PC and quickly set the standard for in-game sniper techniques and bullet physics which influenced games such as Call of Duty 4: Modern Warfare and Unreal Tournament.

Peter Rezon, CEO of Reef Entertainment said; ‘The Nintendo Wii platform has been very good for Reef and we will continue to develop innovative and unique games for it. Following on from our recent launches of Free RunningTM & Rogue Trooper: Quartz Zone MassacreTM, we are incorporating features to ensure that Sniper EliteTM will definitely be an essential purchase for all shooter fans.’

Developed by leading Italian independent developer Raylight, the Wii version of Sniper EliteTM will contain new levels and a raft of additional features making this game one of a kind.

Peter concludes, ‘Sniper Elite represents our most ambitious project yet. We have taken a game which has been called ‘the Gran Turismo of War Games’ and we will fully immerse gamers intoBerlin 1945. Rifle add-ons such as the Wii Zapper have been a primary focus on the making the game as realistic and exciting as possible. In short, we believe this will be one of the most fun shooter titles launched in 2010.

Sniper Elite on Nintendo Wii will be launched Q2 2010.

Reef Entertainment
Established in 2005, Reef Entertainment is based in offices near the city of Milton Keynes, UK. Created as a UK based computer games publishing company, Reef is an independent studio-style organisation - not owned by or connected to any other major entertainment group - to provide Developers and Content Owners with distinct and alternate routes to markets worldwide.