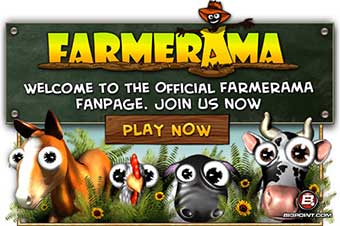 Farmerama is a free online game where players run a virtual farm by completing jobs like tilling the land, planting trees, sowing seeds, raising animals and more. Social activities are a key part of the game with players able to invite friends to help improve the farm, as well as bartering and trading with each other using a virtual currency. Users can also compete against other farmers online in friendly challenges. The game has more than 20 million registered users.

“We’re delighted that Farmerama has been voted the Best Online Game at the 2011 Mashable Awards. We strive to create games that keep players entertained every time they log-in with social activities forming a core part of that experience. The high numbers of people that continue to play Farmerama every day, coupled with accolades like this, prove that we’re onto a winning formula at Bigpoint.” Said Heiko Hubertz, CEO, Bigpont.

The Mashable Awards recognize the year’s best of tech and the web as voted by the Mashable community who cast more than 1.3 million nominations and votes in 25 categories including "Best New Gadget", "Best Music Discovery Service" and "Must-Follow Brand,” among others.

“The Mashable Community has really grown the Mashable Awards program over the past four years,” said Pete Cashmore Founder & CEO of Mashable. “We are grateful to our readers who made this year’s program such a success.”

About Bigpoint
Bigpoint (http://www.bigpoint.com) is an online-game developer, publisher, and content provider for large media concerns. Bigpoint-developed games are played by over 165 million people in more than 30 languages, are free-to-play anytime, anywhere, and require no download or installation. The company’s portfolio includes games in a quality which until now was associated exclusively with CD or console games. More than 600 employees from over 35 different nations work at the company headquarters in Hamburg, Germany or at other locations in Berlin, San Francisco, São Paulo and Malta. Bigpoint’s many distinctions in the industry include the Mashable Best Online Game Award for “Farmerama”, the “Fastest Growing Larger Company” and “Uniqueness of Offering” prizes at the 2010 Media Momentum Awards, as well as the MTV Skyscraper Award for extraordinary achievement in game development. For more information or press material, please visit the press area at www.bigpoint.net.