Digital Chocolate, a leader in social games across growing platforms, today announced the launch of Ninjas Rising™ on Facebook. Ninjas Rising will give users the chance to become a weapon-wielding ninja and challenge others on the leading social networking site.

“Fascination with Ninjas is an enduring cultural phenomenon,” said Marc Metis, President of Digital Chocolate. “Ninjas Rising brings superior graphics and a deeper fighting system to this theme to deliver the most authentic ninja experience on Facebook.”

Ninjas Rising allows players to rise through the ranks of the ninja clans by defeating dark overlords and enemy foes. Users will be able to customize their ninja’s look, gear, fighting styles and more. There are over 20,000 combinations to create so every ninja will have their own unique flair and style. After players deplete all of their health and stamina, they can get entertained by the Geisha girls to recover their energy.

In order to increase your performance, players must train and learn an array of ancient fighting styles using Stealth, Pyro and Throwing Weapons. For each fighting style, there’s a unique set of techniques and combos where the player must master in order to take down their opponent.

Created specifically to take full advantage of the social features on the platform, players can fight and train with friends on Facebook. Digital Chocolate will be implementing enhancements and upgrades for Ninjas Rising in the coming weeks including more ways to interact with friends and new content for the game.

Ninjas Rising will be available to play for free on Facebook by going to the website. For more information about Digital Chocolate’s games, go to Facebook. 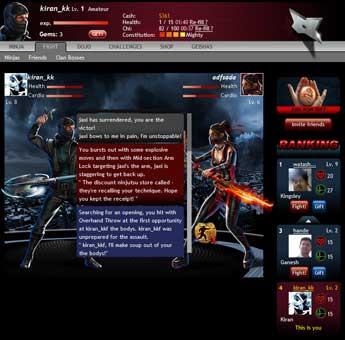 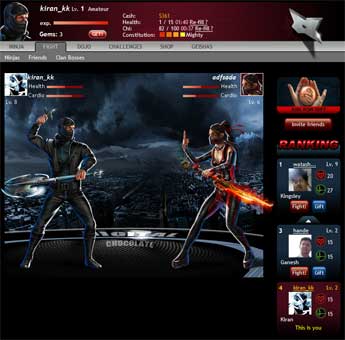