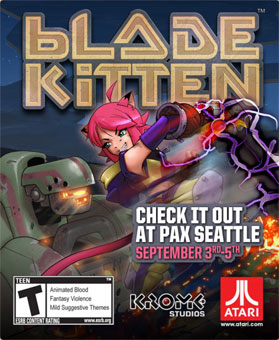 Atari, one of the world’s most recognized publishers and producers of interactive entertainment, and Krome Studios announced today that Blade Kitten, the epic action adventure title starring Kit Ballard, is now available for pre-order on Steam for £9.99/€11.99. Steam purchasers will exclusively receive Kit’s Gothic Costume allowing them to get in touch with her dark side.

Blade Kitten is rated “12” and is due out this September.

ABOUT KROME STUDIOS
Headquartered in Brisbane, with offices in Melbourne and Adelaide, Krome Studios is Australia’s largest video game developer and a leading independent developer of video games worldwide. Founded in 1999, the company has developed 19 games comprising of 95 SKUs for video game systems and personal computers. Krome’s multi-million selling titles (licensed and original game properties, including the hit TY the Tasmanian Tiger™ ) are powered by the company’s proprietary “Merkury” engine technology, ensuring its cutting edge games are developed on schedule, and on budget. More information about Krome can be found